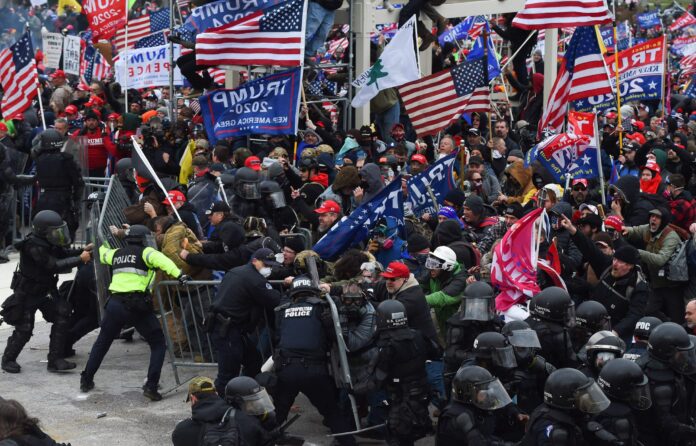 Jack Wade Whitton, a 30-year-old CrossFit instructor from Georgia, was identified by the government as the man in new officer-worn body camera footage also kicking officers and saying, “You’re going to die tonight.”

Assistant U.S. Attorney Colleen Kukowski argued on behalf of the government that Whitton, who remains in custody in Georgia, should not be released pending trial because he remains a threat to the public.

A federal judge said he was “inclined” to order that a Jan. 6 Capitol riot suspect remain in detention on Monday after prosecutors presented video footage of the man dragging a police officer down the steps of the Capitol and into a mob and physically assaulting officers.

Whitton was identified in the new footage through the clothing he was known to have worn on Jan. 6, including a “TRUMP 2020” hat. Kuklowski said Whitton had not denounced his views that led to his attempt that day to stop the government from certifying the 2020 presidential election results, and therefore his ideology could cause him to engage in more violence.

“The defendant isn’t someone that rushed into an assault that was already occurring or took advantage of what others started,” Kukowski said on Monday. “He himself was the instigator.”

Nearly 400 people have been charged in connection to the Jan. 6 riot, when supporters of former President Donald Trump stormed the Capitol Building, delaying the certification of the 2020 election and causing property destruction and injury.

According to UK advisors, there is no need for a fourth...

The Increasing Asian Hate Still A matter Of Discussion

Arkansas Got Back To Dodge Historic Upset Bid From Oral Roberts,...