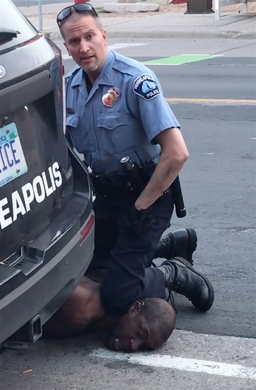 What you’re missing, I told my friends, is that some of us are Black and some of us are white. Those Black people weren’t thinking about being arrested. They are acutely aware that the police will not hesitate to shoot you.

In that place and in that situation, maybe the white onlookers felt the same way. It is traumatic and life-threatening to come upon an encounter like the one between Floyd and former police officer Chauvin and his subordinates. As they testified in Chauvin’s trial, did you hear the crowd members, young and old, crying on the witness stand because they didn’t save George Floyd? What a regret!

Why didn’t anyone intervene to save George Floyd’s life? They had nine minutes to do it while he was under Derek Chauvin’s knee, but no one did. Some in my diverse group of longtime friends wondered about this recently on Facebook — why no bystander bolted forward to break the choke hold, even knowing they’d be arrested.

No way these Minneapolis officers would have hesitated to shoot anyone who got too close. It would have been nice if some hero — Black Panther or Captain America — had come up and intervened, but I am totally afraid that is a fantasy.

Beyond this encounter, there is Chauvin’s record as a Minneapolis police officer. There were 18 complaints against him in his 19 years there, including six from 2014 through 2019 (one involved a woman) in which he used some sort of force as he did in Floyd’s case. Most of the complaints will not be entered into evidence for this trial, by ruling from the judge.

That “crowd” knew cops are the people with the guns who are likely never to be punished for shooting anyone while on the job.

The IMF issues a warning that UK inflation will worsen

Plans to safeguard England’s national parks have been laid out.