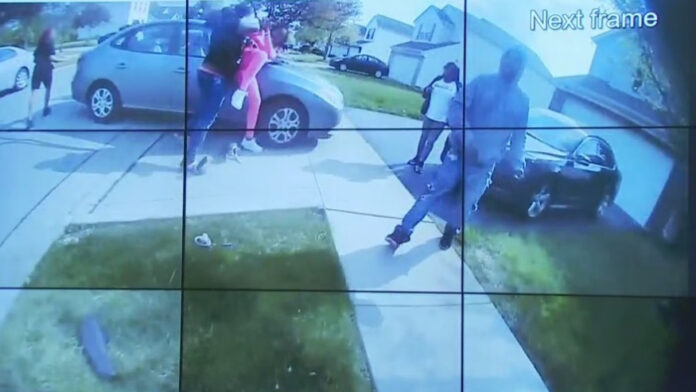 Columbus police released body camera footage of the shooting of the 16-year-old girl by just hours after the incident on Tuesday afternoon.

Police received a 911 call around 4:35 p.m. about an attempted stabbing, saying a caller reported a female trying to stab them then hung up.

About 20 minutes before a guilty verdict was announced in the trial of Derek Chauvin, a Columbus police officer fatally shot a teen girl.

The video shows an officer approaching a driveway with a group of young people standing there. In the video, it appears Bryant pushes or swings at a person, who falls to the ground.

Bryant then appears to swing a knife at a girl who is on the hood of a car, and the officer fires his weapon, striking Bryant, who died a short time later.

Police received a 911 call at 4:35 p.m. about an attempted stabbing when a caller reported a female was trying to stab them. Officers responded to the scene and reported the shooting at 4:45 p.m.

Columbus Fire medics were cleared to come into the scene at 4:46 p.m., police said. The wounded person was transported in critical condition to a nearby hospital, where she was pronounced dead at 5:21 p.m., police said.

Interim Columbus Police Chief Michael Woods said the investigation needs to be completed to determine if the actions of the officers were justified. He said the officer, who was not named, has been placed on administrative leave.

“She could be my grandchild,” said Pettus. “In any way you look at this, it’s a tragedy.”

Exclusive interview with Shitiz Garg, Founder and Chief Architect of Design Your Nest

Racism is ‘pervasive,’ according to research from the Royal Society of Chemistry

Conservationists say the UK’s plan to outlaw animal trophies is too slow.

Stress And Depression Is. The Main Reason For Children Mental Health...