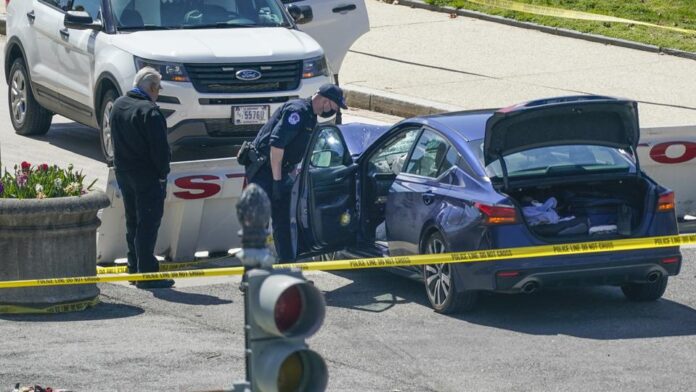 That sequence of events aligns with what a senior congressional aide and a US Capitol Police source told CNN earlier Friday. At the time, the sources said that after the driver of the vehicle rammed his car into a barricade on Constitution Avenue, the driver exited the vehicle brandishing a knife. Police responded, shooting the suspect and taking him into custody.

A law enforcement official told CNN at least one of the officers was stabbed.

Pittman said Friday that the suspect, Green, was not known to USCP before Friday’s attack. A review of Green’s social media shows he posted in the weeks prior that he had lost his job and suffered medical ailments, and said he believed the federal government was targeting him with “mind control.”

One US Capitol Police officer has died and another is injured after a suspect rammed a vehicle into a police barricade outside the Capitol building Friday afternoon, the department’s acting chief Yogananda Pittman told reporters during a press briefing roughly two hours after initial reports of the attack first surfaced.

The officer was identified by Pittman later Friday as Officer William “Billy” Evans, an 18-year veteran of the force and a member of its “First Responders Unit.”

the suspect was quickly neutralized, the deadly incident undoubtedly serves as a stark reminder of the violent insurrection that occurred less than three months ago and the persistent security concerns that have been top of mind for many on Capitol Hill in the time since, despite a recent ramping down of some additional protective measures.

War in Ukraine: Russia has retaliated against anti-war musicians

IMF: UK set for slowest growth of G7 countries in 2023