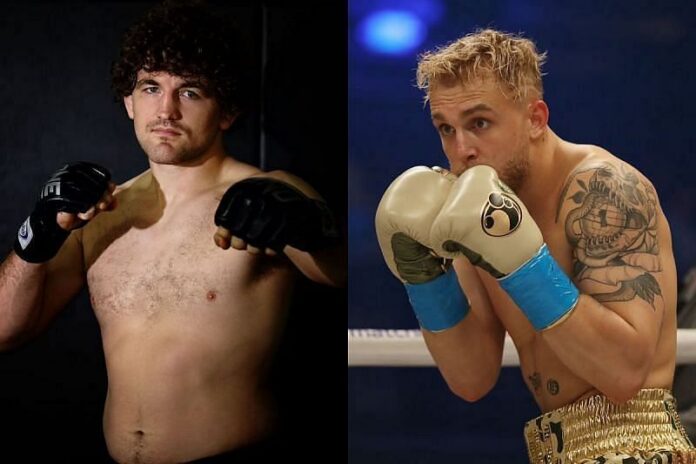 Askren, the retired MMA fighter, got back on his feet and took the mandatory eight-count. But the referee waved off the fight at 1:59 of the first round as Paul improved to 3-0 as a professional boxer.

Jake Paul knocked out Ben Askren in the first round of their highly-publicized boxing match Saturday night in Atlanta.

Paul, the YouTube and social media celebrity, landed a right hand that sent Askren sprawling to the canvas at the Mercedes-Benz Stadium.

After the referee waved off the fight, Paul dropped to the canvas and sobbed. He had dedicated the fight to Shamir “Shadow” Bolivar, Paul’s late bodyguard who died earlier this month.

“He told me I would knock (Askren) out in the first round,’’ Paul said of Bolivar. “He said he had a vision, a dream. This has been the hardest 10 days of my life (since Bolivar’s death). I had to hold it together to keep this fight going. And I’m just honored to be here.’’

Askren, 36, was making his pro boxing debut. But with a 19-2 record as an MMA fighter and as a two-time Division I college wrestling champion, he was considered Paul’s most formidable opponent yet.

During a post-fight press conference, Paul referred to sexual assault allegations he faced the week leading up to the fight. TikTok personality Justine Paradise has accused Paul of sexual assault.

On Tuesday, Paul issued a statement denying the allegations. But he indicated the allegations coupled with the death of his security guard and having trained for three fights in the past 14 months have drained him.

International Picnic Day 2022: History, Significance and Ways To Celebrate The...

“Prayers Are Not Enough.Daunte Wright Should Still Be With Us.”Vice President...

Bridgerton Season 2 And Everything We Know So Far

With Picktime, Manage Your Booking, Appointments, and Meetings Free of Cost

Steve Thompson, the champion of the Rugby World Cup, claims he...

Jose Mourinho: ‘A serial winner who has brought Roma to life’