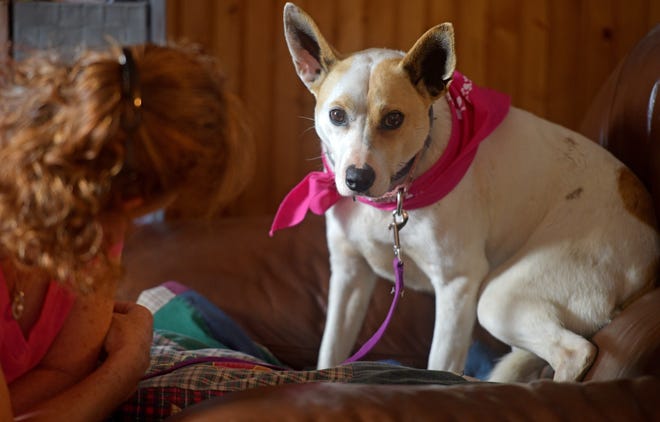 Perry and her friends searched for the wandering pooch, described as shy and timid, with no luck.

“There was never any sign of her,” said Perry, a Framingham Public Schools teacher who lives in Millbury. “We looked all summer. I always looked.”

It’s not clear how Bay made it to Needham, but she began popping up in a backyard there about three years ago, said Danielle Matthew, a volunteer for Missing Dogs Massachusetts, a group that tries to reunite missing dogs with their owners.

The Needham residents who discovered Bay found extra dog poop in their yard and set up a camera to determine the culprit. Eventually, they found the suspect, the white Basenji mix.

The residents thought the dog was local and that its owners had just let it roam. They would even occasionally feed her.

More recently, Matthew and another volunteer decided to catch the prowling pooch. Last week, they set up the trap, and early Tuesday morning, they caught the wandering woofer when she went in to snag a meal.

Bay is now home and adjusting to the life of a dog with a family after so many years alone on the streets. Perry said she’s taking her time to let Bay get comfortable again.

The IMF issues a warning that UK inflation will worsen

Amazon will cover the cost of abortions and other treatments for...