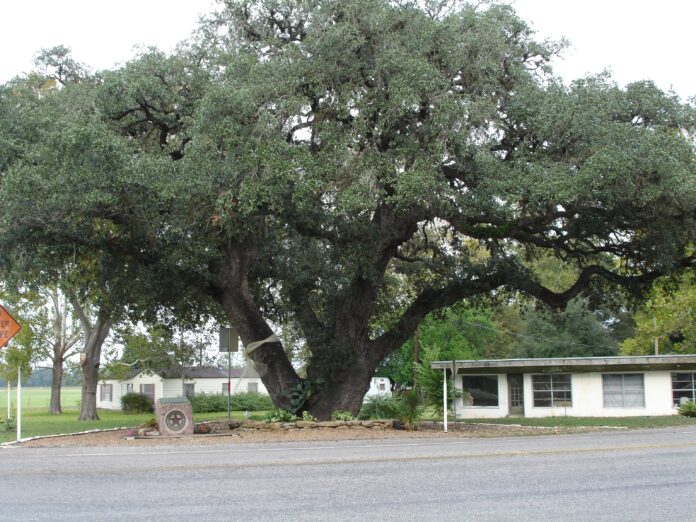 There’s no indication that in November 1935, a year before the marker was placed there, two African American teenagers were taken to the tree by a mob and lynched. In a New York Times article, “Texas Prosecutor Condones Lynching,” the elected official says it was “an expression of the will of the people.”

A faded photograph, a ghostly negative taken at night, shows two bodies suspended from what is still known as the Hanging Tree. Benny Mitchell was 16. Ernest Collins was 15.

There’s a huge oak tree in the middle of a quiet rural intersection just a mile or so outside of downtown Columbus, Texas. Its branches reach over the roads on all sides. At its base, a state historical marker notes the centennial founding of Colorado County.

In the classic old Westerns, hangings were part of frontier justice, much like the retribution against murderous bandits in Larry McMurtry’s novel “Lonesome Dove.” Today, though, you’d have to be not paying attention to be unaware of the rope as part of the persecution of Mexican Americans and African Americans in Texas.

None of this history is hidden. Numerous books detail these crimes. These include “The Injustice Never Leaves You” by Monica Muñoz Martinez, “Forgotten Dead” by William Carrigan and Clive Webb, and “Cult of Glory: The Bold and Brutal History of the Texas Rangers” by Doug Swanson.

After widespread reaction about his remarks, Roy decided to double down. “We need more justice and less thought policing,” he said, and finished: “No apologies.”

It’s hard to know what he was thinking, whether he knew the implications of his reference, whether this was just an attempt to get a media reaction, or what was in his heart. But his seeming ignorance of this sorry history in Texas, and what “get a rope” represents, does not mean that we also have to remain ignorant.

Mystery of alleged Chinese hack on eve of Ukraine invasion

Amazon will cover the cost of abortions and other treatments for its employees in the US.

“Prayers Are Not Enough.Daunte Wright Should Still Be With Us.”Vice President...